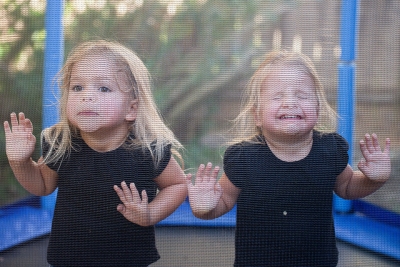 Trampoline games are abundant and varied, the best tend to be made on the spot with whoever is there at the time.

We provide some ideas below but use them as starting points to develop your own games as kids ages, trampoline size, padding or no padding, net or no net and the weather all come into play!

The games suggested below are best for trampoline with a net and pads. When we suggest having a ball on the trampoline we are recommending soft soccer balls like a “wahu” ball and soft tennis sized balls.

Number of players variable. Each player has a set of trampoline poles with the netting between as their goal area the first to 5 or 15 goals in anyone else’s goals combined is the winner. Or the one who gets 10 goals in their net area first is the loser (this can cause ganging up on one player so playing to win goals in anyone’s goal area seems to be fairer to play to win than to play to make someone lose!)

You can have safe areas – limited time in the safe area – X number of jumps by the tagger between tagging etc... be creative and have fun. 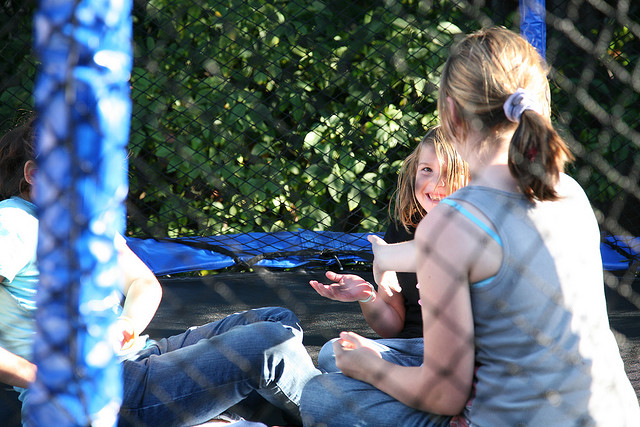 Say no more – boys do this mainly! Some general safety rules should apply and a respect for each other to stop when asked to stop is very important.

You can have 2 people throwing the ball if you don’t have a net or if you do have a net around your trampoline then jumping to avoid the ball or balls is all you need to do then everyone can join in. Stress the importance of honesty if you are hit even lightly as this will save arguments! Have a set number like 10 touches that then indicates the loser.

Games for Fitness and Agility

Can include copying another’s routine of bouncing, front whackers, bottom, knees etc in a set order.

Or longest jump from one end to the other.

A bit like whirlpool in a swimming pool – 2 people start at opposite sides of the trampoline jumping around the edge on the mat to overtake each other (If one person is always winning then create a handicap and make the starting gap bigger).

One person closes their eyes and has to find others on the trampoline and tag them – no need to call out as the eyes closed person can feel the slope on the mat as to where the others are. Being careful and mindful of each other again is of utmost importance with this game.